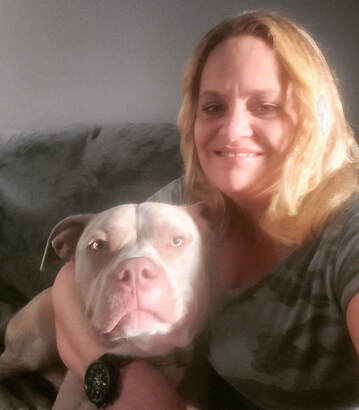 Julie Nejman has dreamed of owning her own home for years. After raising four boys as a single mom, welcoming two grandchildren, and navigating incredible health setbacks, Nejman is proud to finally be closing on her very first home.

In early 2020, Nejman suffered a series of three massive strokes which left her with permanent disabilities and partial vision loss. Once a busdriver, a career she loved, Nejman’s life changed drastically after her strokes. Despite the repeated blows to her health, Nejman kept a positive attitude and an eye for the future.

During the pandemic, Nejman began working towards her goal of homeownership. She made it a point to pay off her debts and work to get her credit score higher. She attended one of Affordable Housing Center’s First-Time Homebuyer courses where she was connected with her housing counselor, Doris Paez, her loan officer, and her home inspector.

“My biggest challenge is definitely having the stroke,” Nejman reflects, “I used to always be around people, but since my stroke when I go around people I get anxious because I am worried that they won’t understand me when I talk. So for me that makes it very hard, because not everyone will be willing to work with me, as someone with disabilities, bad hearing, and a service dog.”

Despite these difficulties, Nejman found her home-buying team was not only accepting of her, but that they all went above and beyond to help her throughout the homebuying process. “Everyone has been so understanding,” she says, “It has been so wonderful. When it was time to apply for the NighborhoodLIFT grant, everything was ready go.”

In October, Nejman was awarded the NeighborhoodLIFT grant of $15,000 for down payment and closing costs assistance. The grant award meant that she could pursue her dream of homeownership without worrying about the high cost burden of closing on a home. “I was so happy,” Nejman reflects, “I have some money saved, but I was scared it was not going to be enough to cover everything. Now, I can breathe a sigh of relief.”

After successfully closing, Nejman and her service dog, Snucca, will be settling into their new home this November. Nejman is excited for the peace of mind owning a home will give her. “It is a fresh start is the best way to say it. Especially after everything I’ve been through,” she reflects, “to be able to say that I was able to get a house and I did it all by myself. I set up appointments to look at houses, I made sure I saved money, I set up meetings about mortgages. I did this!”

“I think it is good for people to see that even though I am disabled, and a little bit older, you can still accomplish anything you put your mind to, because look! I did!”

Nejman is grateful for the help of her homebuying team, all of whom worked with her closely to ensure she succeeded in buying her first home. “It’s especially good to have AHCOPA helping you when you are ready to buy a house,” she says, “get involved with them because they will help you every step of the way because you are not alone.”
​When she was under contract, AHCOPA assisted her in obtaining the new Philly First Home Grant, which awarded her the funds to close on the home. There is no doubt in her mind, without the new Philly First Home Grant, homeownership would have been a more arduous, nearly impossible accomplishment. Thanks to the grant, she did not need to work ungodly amounts of overtime and be absent from her children in order to save the necessary money for the down payment and closing costs.

For Herimar and her boys, a new journey begins. Being in their own place, they are thrilled to have the freedom to establish their own traditions and memories. Congratulations Herimar and godspeed!
When the Bundy’s began counseling, their major concern was whether their credit status would allow them to qualify for financing. After working with the counselors at AHCOPA, they felt comfortable and empowered. The counselors showed them how the credit system works and what they needed to do to qualify for a mortgage. Their counselor checked their credit standing and noticed missed payments were being reported on their car loan. The Bundy’s were adamant that no payments were missed. The counselor showed them how to dispute the error and helped draft a letter to the credit bureaus. Three months later, the error was corrected and Reggie’s median credit score increased by 50 points. This small correction meant that they could qualify for mortgage financing.

Their dream of purchasing one of the Ingersoll Commons units became more attainable. They imagined how the house would be furnished. In order to afford the property they made some adjustments and sacrifices to their budget. They agreed to let go of one of their cars to save on the cost of gas and insurance. A new house with all of their desired amenities was too good to pass up.

Now the fruit of their diligence and persistence is being realized. Purchasing the house has completely changed their lives. Following the settlement of the house, the Bundy’s slept better than they had in years. Congratulations to Reggie and Louise. Welcome home!
215-765-1221